By the end of this tutorial, you will have created a Conduit application that serves fictional heroes from a PostgreSQL database. You will learn the following:

Make sure that your system has the latest stable version of dart installed. Find the version suited for your operating system here: https://dart.dev/get-dart

Install the conduit command line tool by running the following command in your shell:

Create a new project named heroes by entering the following in your shell:

This creates a heroes project directory with a default server implementation populating it.

In your browser, navigate to http://conduit-tutorial.conduit.dart.io. This browser application is a 'Hero Manager' - it allows a user to view, create, delete and update heroes. (It is a slightly modified version of the AngularDart Tour of Heroes Tutorial.) It will make HTTP requests to http://localhost:8888 to fetch and manipulate hero data. The application you will build in this tutorial respond to those requests.

!!! warning "Running the Browser Application Locally" The browser application is served over HTTP so that it can access your Conduit application when it runs locally on your machine. Your browser may warn you about navigating to an insecure webpage, because it is in fact insecure. You can run this application locally by grabbing the source code from here.

In this first chapter, you will write code to handle two requests: one to get a list of heroes, and the other to get a single hero by its identifier. Those requests are:

!!! tip "HTTP Operation Shorthand" The term GET /heroes is called an operation. It is the combination of the HTTP method and the path of the request. Each operation is unique to an application, so your code is segmented into units for each operation. Sections with a colon, like the ':id' segment, are variable: they can be 1, 2, 3, and so on.

Requests are handled by controller objects. A controller object can respond to a request. It can also take other action and let another controller respond. For example, it might check if the request is authorized, or send analytical data to some other service. Controllers are composed together, and each controller in the composition performs its logic in order. This allows for some controllers to be reused, and for better code organization. A composition of controllers is called a channel because requests flow in one direction through the controllers.

Our application will link two controllers: 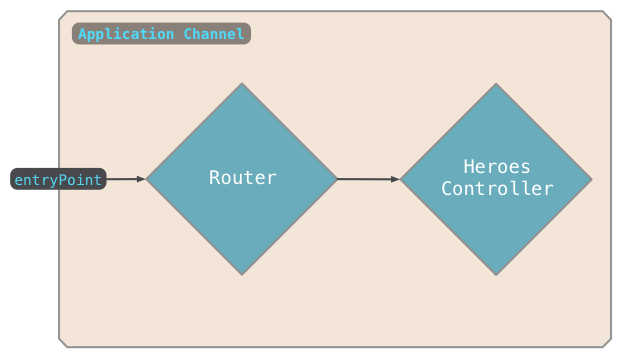 When your application gets a request, the entryPoint controller is the first to handle it. In our case, this is a Router - a subclass of Controller.

!!! tip "Controller Subclassing" Every controller you use will be a subclass of Controller. There are some controller subclasses already in Conduit for common behaviors.

You use the route method on a router to attach a controller to a route. A route is a string syntax that matches the path of a request. In our current implementation, the route will match every request with the path /example. When that request is received, a linked function runs and returns a 200 OK response with an example JSON object body.

We need to route the path /heroes to a controller of our own, so we can control what happens. Let's create a HeroesController. Create a new file in lib/controller/heroes_controller.dart and add the following code (you will need to create the subdirectory lib/controller/):

Right now, our HeroesController isn't hooked up to the application channel. We need to link it to the router. First, import our new file at the top of channel.dart.

Then link this HeroesController to the Router for the path /heroes:

We now have a application that will return a list of heroes. In the project directory, run the following command from the command-line:

This will start your application running locally. Reload the browser page http://conduit-tutorial.conduit.dart.io. It will make a request to http://localhost:8888/heroes and your application will serve it. You'll see your heroes in your web browser:

You can also see the actual response of your request by entering the following into your shell:

You'll also see this request logged in the shell that you started conduit serve in.

When a controller handles a request, it can either send a response or let one of its linked controllers handle the request. By default, a Router will send a 404 Not Found response for any request. Adding a route to a Router creates an entry point to a new channel that controllers can be linked to. In our application, HeroesController is linked to the route /heroes.

A channel can have zero or many middleware controllers, but must end in an endpoint controller. Most controllers can only have one linked controller, but a Router allows for many. For example, a larger application might look like this:

Each of these objects is a subclass of Controller, giving them the ability to be linked together to handle requests. A request goes through controllers in the order they are linked. A request for the path /users will go through an APIKeyValidator, an Authorizer and finally a UsersController. Each of these controllers has an opportunity to respond, preventing the next controller from receiving the request.

Our server doesn't handle this request yet - it only handles requests that have exactly the path /heroes. Since a request for individual heroes will have a path that changes depending on the hero, we need our route to include a path variable.

There's one hiccup. The route /heroes/:id no longer matches the path /heroes. It'd be a lot easier to organize our code if both /heroes and /heroes/:id went to our HeroesController; it does heroic stuff. For this reason, we can declare the :id portion of our route to be optional by wrapping it in square brackets. In channel.dart, modify the /heroes route:

Since the second segment of the path is optional, the path /heroes still matches the route. If the path contains a second segment, the value of that segment is bound to the path variable named id. We can access path variables through the Request object. In heroes_controller.dart, modify handle: 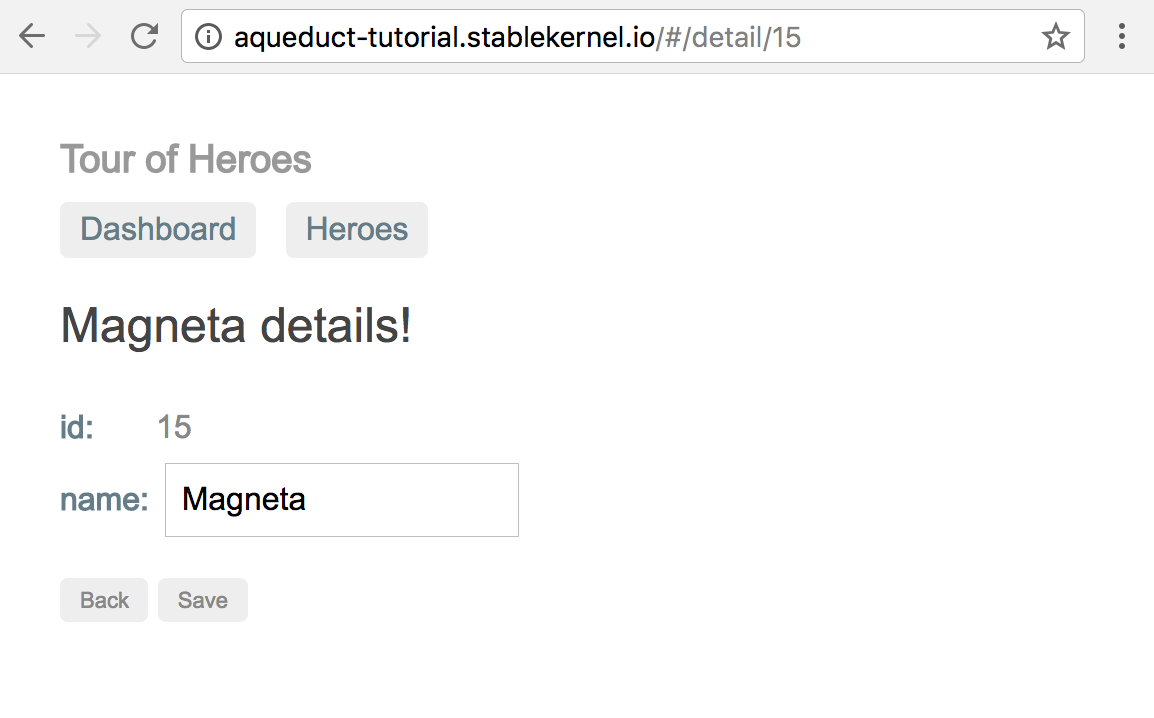 You can verify that your server is responding correctly by executing curl -X GET http://localhost:8888/heroes/11 to view the single hero object. You can also trigger a 404 Not Found response by getting a hero that doesn't exist.

Our HeroesController is OK right now, but it'll soon run into a problem: what happens when we want to create a new hero? Or update an existing hero's name? Our handle method will start to get unmanageable, quickly.

That's where ResourceController comes in. A ResourceController allows you to create a distinct method for each operation that we can perform on our heroes. One method will handle getting a list of heroes, another will handle getting a single hero, and so on. Each method has an annotation that identifies the HTTP method and path variables the request must have to trigger it.

!!! tip "Browser Clients" In addition to curl, you can create a SwaggerUI browser application that executes requests against your locally running application. In your project directory, run conduit document client and it will generate a file named client.html. Open this file in your browser for a UI that constructs and executes requests that your application supports.

In our getHeroByID method, we make a dangerous assumption that the path variable 'id' can be parsed into an integer. If 'id' were something else, like a string, int.parse would throw an exception. When exceptions are thrown in operation methods, the controller catches it and sends a 500 Server Error response. 500s are bad, they don't tell the client what's wrong. A 404 Not Found is a better response here, but writing the code to catch that exception and create this response is cumbersome.

The value of the path variable id will be parsed as an integer and be available to this method in the id parameter. The @Bind annotation on an operation method parameter tells Conduit the value from the request we want bound. Using the named constructor Bind.path binds a path variable, and the name of that variable is indicated in the argument to this constructor.

!!! tip "Bound Parameter Names" The name of a bound parameter doesn't have to match the name of the path variable. We could have declared it as @Bind.path('id') int heroID. Only the argument to Bind's constructor must match the actual name of the path variable. This is valuable for other types of bindings, like headers, that may contain characters that aren't valid Dart variable names, e.g. X-API-Key.

The More You Know: Multi-threading and Application State

In this simple exercise, we used a constant list of heroes as our source of data. For a simple getting-your-feet-wet demo, this is fine. However, in a real application, you'd store this data in a database. That way you could add data to it and not risk losing it when the application was restarted.

More generally, a web server should never hang on to data that can change. While previously just a best practice, stateless web servers are becoming a requirement with the prevalence of containerization and tools like Kubernetes. Conduit makes it a bit easier to detect violations of this rule with its multi-threading strategy.

When you run a Conduit application, it creates multiple threads. Each of these threads has its own isolated heap in memory; meaning data that exists on one thread can't be accessed from other threads. In Dart, these isolated threads are called isolates.

If you are storing any data in your application, you'll find out really quickly. Why? A request that changes data will only change that data in one of your application's isolates. When you make a request to get that data again, its unlikely that you'll see the changes - another isolate with different data will probably handle that request.