A Request is created for each HTTP request to your application. A Request stores everything about the HTTP request and has some additional behavior that makes reading from them easier. You handle requests by writing code in a controller object or closures.

All properties of a request are available in its raw property (a Dart standard library HttpRequest). A Request has attachments that data can be attached to in a controller for use by a linked controller:

Headers are encoded according to dart:io.HttpHeaders.add. For body encoding behavior, see the following sections.

Encoding and Decoding the HTTP Body

Request and Response objects have behavior for handling the HTTP body. You decode the contents of a Request body into Dart objects that are used in your code. You provide a Dart object to a Response and it is automatically encoded according to the content-type of the response.

Every Request has a body property. This object decodes the bytes from the request body into Dart objects. The behavior for decoding is determined by the content-type header of the request (see the section on CodecRegistry later in this guide). When you decode a body, you can specify the Dart object type you expect it to be. If the decoded body object is not the expected type, an exception that sends a 400 Bad Request error is thrown.

Once a request's body has been decoded, it can be accessed through a synchronous as method. This method also takes a type argument to enforce the type of the decoded body object.

!!! tip "Inferred Types" You don't need to provide a type argument to as or decode if the type can be inferred. For example, object.read(await request.body.decode()) will infer the type of the decoded body as a Map<String, dynamic> without having to provide type parameters.

If a body cannot be decoded according to its content-type (the data is malformed), an error is thrown that sends the appropriate error response to the client.

For more request body behavior, see the API reference for RequestBody, the section on body binding for ResourceControllers and a later section in this guide on Serializable.

!!! note "Max Body Size" The size of a request body is limited to 10MB by default and can be changed by setting the value of RequestBody.maxSize during application initialization.

An HTTP response often contains a body. For example, the body in response to GET /users/1 might be JSON object that represents a user. To ensure the client understands that the body is a JSON object, it includes the header Content-Type: application/json; charset=utf-8.

When creating a Response that has a body, you provide a body object and a contentType. For example:

Body objects are encoded according to their content-type. In the above, map is first encoded as a JSON string and then to a list of UTF8 bytes.

A ContentType is made up of three components: a primary type, a subtype and an optional character set.

The primary and subtype determine the first conversion step and the charset determines the next. Each step is performed by an instance of Codec (from dart:convert). For example, the content type application/json selects JsonCodec, while charset utf-8 selects Utf8Codec. These two codecs are run in succession to convert the Map to a list of bytes. The codec is selected by your application's CodecRegistry; this is covered in later section.

Not all content types require two conversion steps. For example, when serving an HTML file, the body object is already an HTML String. It will only be converted by a charset encoder:

And an image body object needs no conversion at all, since it is already a list of bytes. If there is no registered codec for a content-type, the body object must be a byte array (List<int> where each value is between 0-255).

You may disable the automatic encoding of a body as long as the body object is a byte array:

See a later section for more details on content type to codec mappings. Also, see the documentation for CodecRegistry for details on built-in codecs and adding codecs.

A body object may also be a Stream<T>. Stream<T> body objects are most often used when serving files. This allows the contents of the file to be streamed from disk to the HTTP client without having to load the whole file into memory first. (See also FileController.)

When a body object is a Stream<T>, the response will not be sent until the stream is closed. For finite streams - like those from opened filed - this happens as soon as the entire file is read. For streams that you construct yourself, you must close the stream some time after the response has been returned.

In the above sections, we glossed over how a codec gets selected when preparing the response body. The common case of ManagedObject<T> body objects that are sent as UTF8 encoded JSON 'just works' and is suitable for most applications. When serving assets for a web application or different data formats like XML, it becomes important to understand how Conduit's codec registry works.

CodecRegistry contains mappings from content types to Codecs. These codecs encode response bodies and decode request bodies. There are three built-in codecs for application/json, application/x-www-form-urlencoded and text/*. When a response is being sent, the repository is searched for an entry that exactly matches the primary and subtype of the Response.contentType. If an entry exists, the associated Codec starts the conversion. For example, if the content type is application/json; charset=utf-8, the built-in application/json codec encodes the body object.

If there isn't an exact match, but there is an entry for the primary type with the wildcard (*) subtype, that codec is used. For example, the built-in codec for text/* will be selected for both text/plain and text/html. If there was something special that had to be done for text/html, a more specific codec may be added for that type:

Codecs must be added in your ApplicationChannel.prepare method. The codec must implement Codec from dart:convert. In the above example, when a response's content type is text/html, the HTMLCodec will encode the body object. This codec takes precedence over text/* because it is more specific.

When selecting a codec for a response body, the ContentType.charset doesn't impact which codec is selected. If a response's content-type has a charset, then a charset encoder like UTF8 will be applied as a last encoding step. For example, a response with content-type application/json; charset=utf-8 will encode the body object as a JSON string, which is then encoded as a list of UTF8 bytes. It is required that a response body's eventually encoded type is a list of bytes, so it follows that a codec that produces a string must have a charset.

If there is no codec in the repository for the content type of a Response, the body object must be a List<int> or Stream<List<int>>. If you find yourself converting data prior to setting it as a body object, it may make sense to add your own codec to CodecRegistry.

A request's body always starts as a list of bytes and is decoded into Dart objects. To decode a JSON request body, it first must be decoded from the list of UTF8 bytes into a string. It is possible that a client could omit the charset in its content-type header. Codecs added to CodecRegistry may specify a default charset to interpret a charset-less content-type. When a codec is added to the repository, if content-type's charset is non-null, that is the default. For example, the JSON codec is added like this:

If no charset is specified when registering a codec, no charset decoding occurs on a request body if one doesn't exist. Content-types that are decoded from a String should not use a default charset because the repository would always attempt to decode the body as a string first.

Body objects may be compressed with gzip if the HTTP client allows it and the CodecRegistry has been configured to compress the content type of the response. The three built-in codecs - application/json, application/x-www-form-urlencoded and text/* - are all configured to allow compression. Compression occurs as the last step of conversion and only if the HTTP client sends the Accept-Encoding: gzip header.

Content types that are not in the codec repository will not trigger compression, even if the HTTP client allows compression with the Accept-Encoding header. This is to prevent binary contents like images from being 'compressed', since they are likely already compressed by a content-specific algorithm. In order for Conduit to compress a content type other than the built-in types, you may add a codec to the repository with the allowCompression flag. (The default value is true.)

You may also set whether or not a content type uses compression without having to specify a codec if no conversion step needs to occur:

Most request and response bodies are JSON objects and lists of objects. In Dart, JSON objects are maps. A Serializable object can be read from a map and converted back into a map. You subclass Serializable to assign keys from a map to properties of a your subclass, and to write its properties back to a map. This allows static types you declare in your application to represent expected request and response bodies. Conduit's ORM type ManagedObject is a Serializable, for example.

The body object of a response can be a Serializable. Before the response is sent, asMap() is called before the body object is encoded into JSON (or some other transmission format).

For example, a single serializable object returned in a 200 OK response:

A response body object can also be a list of Serializable objects. 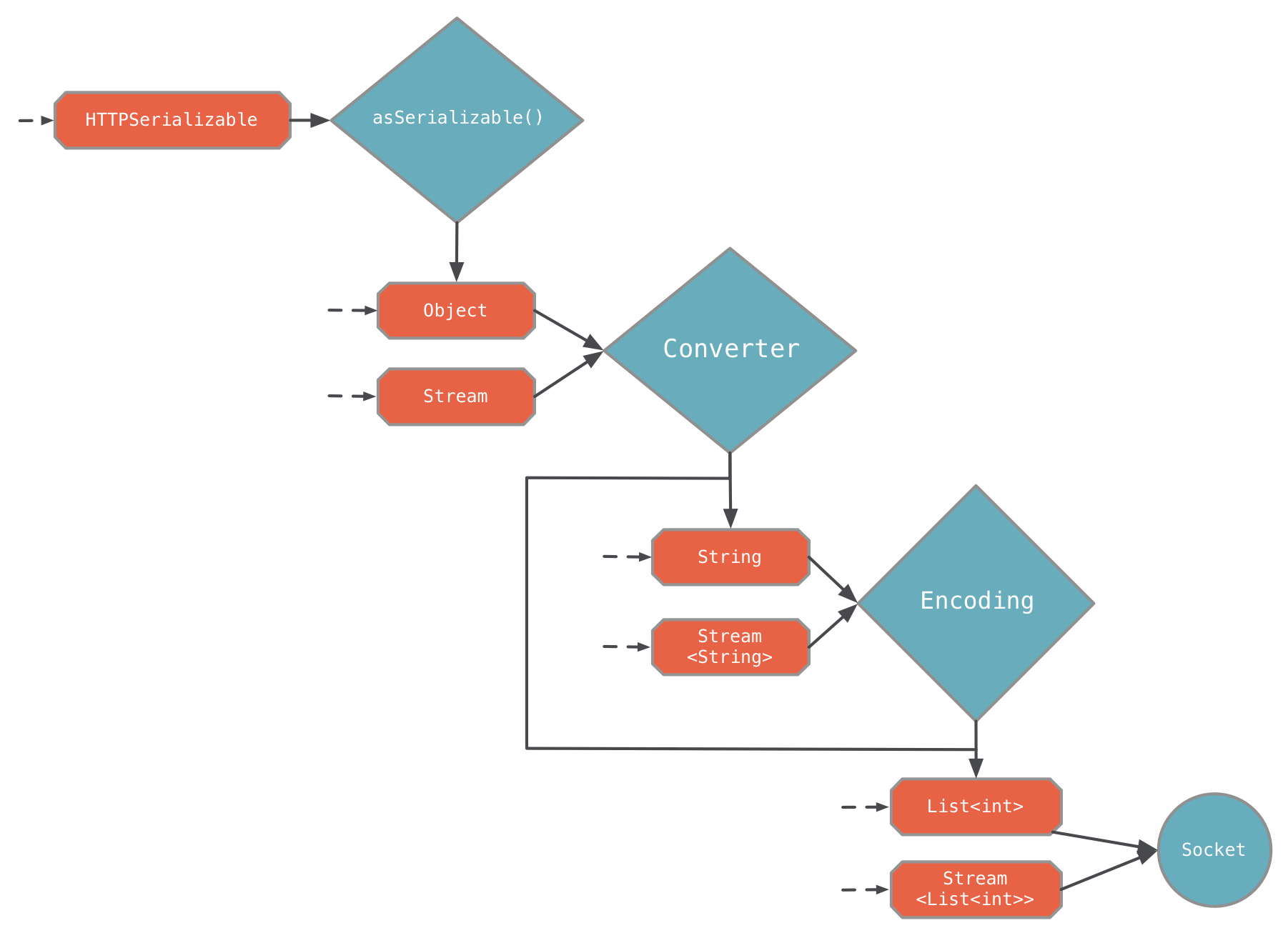 A serializable object can be read from a request body:

Both serializable and a list of serializable can be bound to a operation method parameter in a ResourceController.

Both read and Bind.body (when binding a Serializable) support key filtering. A key filter is a list of keys that either discard keys from the body, requires keys in the body, or throws an error if a key exists in the body. Example:

An object that extends Serializable may be used as a response body object directly:

readFromMap is invoked by read, after all filters have been applied.

See the section on how Serializable types work with OpenAPI documentation generation here.